Nova Scotia - Land and the sea in colourful motion 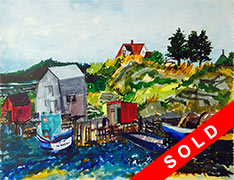 On my first trip to Nova Scotia five of us stayed in a house in Green Rocks. Green Rocks hugs the water and climbs up an expanse of green where cottages and deer share the very fertile land.

My goal was to paint. Colourful sites were close by; Mahone Bay, Lunenburg, Peggy's Cove and Blue Rocks.

It was the colour of Blue Rocks that became my focus. Beyond the road sign saying "No Exit" I found water and more water, interrupted only by the occasional shed or boats.

Glorious colour was everywhere. It knocked me out. The buildings were painted in pure colours and the boat paraphernalia was also in contrast to the pure white of the boats, which transported fishermen working at night and tourists sightseeing during the day.

"The colours in the land are in constant motion while the water aggressively boils." Sharon Abron Drache, Ottawa Jewish Bulletin, September 9, 2002. 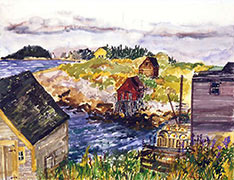 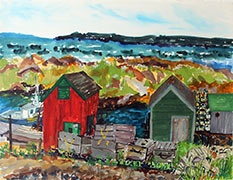 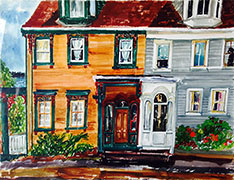