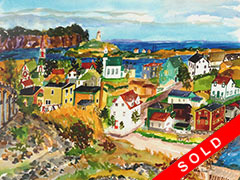 Newfoundland friends swore to me that September was the off-season month to go there because there were fewer tourists, the prices are cheaper and the weather was normally wonderful. Not so for the weather in 2005, but it is an important fact that when it didn't rain it was awesome.

Grey is often described as the local colour or lack thereof but I would say the variety of blues from turquoise to purple refer more appropriately to the water and rocks. Walls of rock climb everywhere covered with trees of many varieties. Believe me purple was the key colour of the work while white house’s light up the small communities.

In the fishing village of Champney near Trinity Bay houses were being painted blues and yellows by the fishermen in the ‘off season’-a refreshing contrast.

The capital city of St. John’s has streets lined with houses of bright colour. What a refreshing sight for the eyes, to record these colourful unique streets.

"Trinity Bay – from the Kitchen Window" 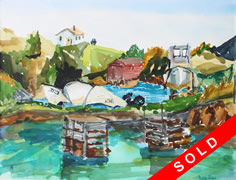 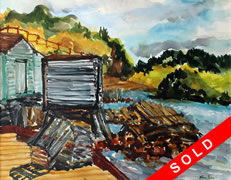