Italy - watercolours of the colourful landscape 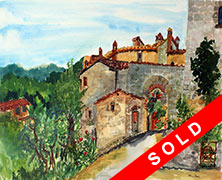 Historical architecture, fields of magnificent sunflowers and overflowing markets were feasts of colour and shape, and were challenges for me as an artist on our four trips to Italy from Umbria to the Tuscany area and surroundings.

By living in a small community near Sienna for a month it was possible to follow the flow of the area and paint the most interesting and colourful sites.

By happenstance I found myself in hilly areas so there were many patterns and designs visible as I looked over the landscape bathed in brilliant sunshine.

Vineyards abound but one must not forget to mention the golden glow of the vast fields of sunflowers that were growing along every turn of the countryside roads.

In amongst magnificent houses with sienna tile roofs I found lots of earthy pigment was necessary to contrast the Tuscan soil from hamlets of houses, shops, and coloured buildings that nestle one beside the other.

"Her rhythmic brushstrokes transmit a joy in the fertile symmetry of the area-umbers, sienna’s, ochre’s, reds, and the very pigments of the local earth along with the vivid purples of lavender and brilliant yellow-gold horizontal vistas." Ellen Schowalter - Glebe Report, Ottawa, August 20, 1999. 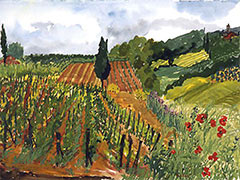 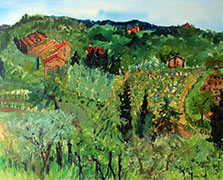 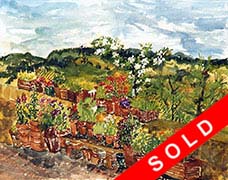 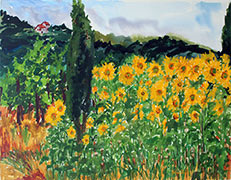 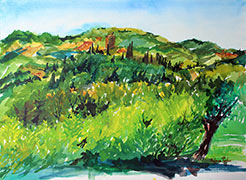 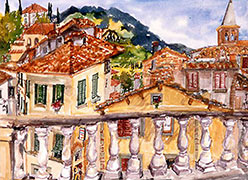 "Anghiari – from the Town Square" 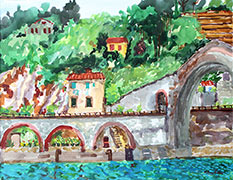 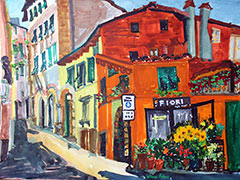 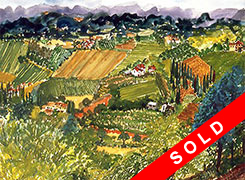