Biography - A focus of my life in art 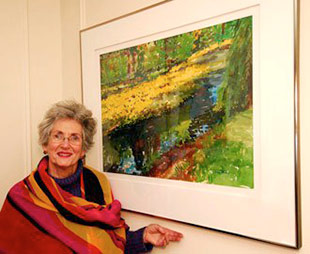 How fortunate I was at 8 years of age to be selected for Arthur Lismer’s Saturday morning classes at the Art Gallery of Ontario. From my teens on painting became the focus of my life. Leap forward a number of years to art classes at Central Technical School and the Ontario College of Art both in Toronto, as well as the University of British Columbia, and Colorado College, Colorado Springs, U.S.A.

With a move to Ottawa, Ontario, Canada in 1961 I began teaching drawing and painting for a number of years. I later became the Head of Visual Arts in the Special Arts programme at the High School of Commerce, and subsequently at Canterbury High School of the Arts until 1992. Only proven talented high school students and adults planning a career as artists were accepted.

It was important for an art teacher to not only have the practical skills but also an historic background, so with evening and summer courses I earned an Honours degree in Art History at Carleton University.

During my 30 years of teaching drawing and painting I was an associate professor at Queen’s University, for art teachers qualifying for the Ontario Ministry of Education as art specialists.

My technique is the layering of colour; light over dark and dark over light, producing an extremely dense and complex surface on which modeling is accomplished with colour.

I have traveled extensively to Portugal, Switzerland, France, Italy and Israel to analyze the landscape, paint "in situ," and capture the momentary changes in light. These trips have led to numerous solo and group exhibitions.

For many years the focus of my watercolours had been on the Canadian landscape commencing with the coastal areas of Nova Scotia, Quebec City, Newfoundland, Ottawa, as well as Florida.

I have been a winner of a number awards, scholarships, as well as being a Fellow of the Ottawa Watercolour Society since 1982. I have had an extensive exhibition history having participated in numerous solo and group shows in Kingston, Montreal, Ottawa, Almonte and Toronto. My work is in private and corporate collections in England, France, Holland, and across Canada.

My life as an artist and educator has resulted in many accolades, including reviews from CBC Radio and Television, a number of regional radio stations and an independent filmmaker, as well as being featured in newspapers and magazines. I had been on several occasions consulted by curators of the National Gallery of Canada to explain various aspects of watercolour techniques and also to demonstrate the practical applications of the medium in the works of Canadian artists.

On December 3, 2004 I was honoured to win the Artistic Excellence Award sponsored by the National Arts Centre for "Celebration of People."

I continue to work pursuing my craft as a watercolour artist.